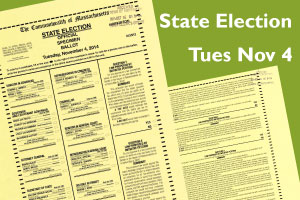 What’s on the Hopkinton Ballot:

Senator in US Congress

Representative in US Congress

Shall the state representative from this district be instructed to vote in favor of a resolution calling upon Congress to propose an amendment to the US Constitution affirming that 1) rights protected under the Constitution are the rights of natural persons only and 2) both Congress and the states may place limits on political contributions and political spending? http://www.metrowestdailynews.com/article/20141101/NEWS/141109518