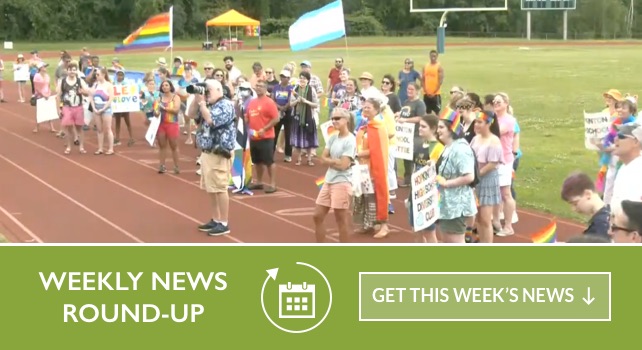 A colorful crowd gathered Saturday afternoon at the Hopkinton High School outdoor track and took a short walk as part of a much longer journey — one for LGBTQ+ recognition and acceptance.

The inaugural LGBTQ+ Pride Parade drew town leaders, representatives from local organizations and those who just wanted to show support for the movement. The groups walked around the track while about 150 people watched from the stands.

The Parks & Recreation Commission met briefly on Wednesday evening and discussed the maintenance and possible repair of the synthetic turf at the athletic fields off Fruit Street.

“The commission agreed to have Tom Irwin Advisors come to perform testing on the Fruit Street synthetic turf,” said Parks & Recreation director Jay Guelfi. “We are going through the process now of determining how to proceed going forward.”
View Article

The work includes the installation of nearly 1 mile of water main from #201 Hayden Rowe, near the Chestnut Street intersection, to the Milford Town line. A new 8″ water main will be installed and the existing 6″ water main will be abandoned in place. The work will take approximately 3 months and no interruption of water service is expected.

Every year, people from around the world flock to Hopkinton to compete in the Boston Marathon. Despite the town’s welcoming and inclusive attitude for the celebrated day, Hopkinton internally is experiencing its own “moment” on race and identity — a reckoning of sorts occurring both behind closed doors and more publicly since Miller’s death.
View Article

After taking off last year due to the pandemic, the Hopkinton PolyArts festival will return to the Town Common on Sept. 18.

Established in 1974 as a festival that featured regional artisans, crafters and local nonprofits and managed by a small committee of volunteers, PolyArts is becoming a subcommittee of the Hopkinton Cultural Council.

Planning Board discusses modifications for subdivision off Hayden Rowe

The Planning Board held two hearings at its Monday meeting, including a lengthy discussion about modifications to the Connelly Farms subdivision at the corner of Hayden Rowe Street and College Street.

The hearing eventually was continued with a 5-0 vote because town engineering consultant BETA Group submitted a letter dated June 18 with some modifications to the project on the day of the meeting.

High school addition delays: The Hopkinton School Committee met Thursday and discussed the progress on the high school addition, which now is expected to be mostly complete by the beginning of the school year after corrections to the work were made.

International trip proposals approved: The committee approved plans for four international trips during school vacation periods next year by a 4-1 vote. Member Meg Tyler voted against the trips, noting the high cost and the concern that they are out of reach for some students to afford.

Enrollment numbers jump: There are 232 approved enrollments for kindergarten, with 32 pending. For first grade, there are 19 approved new enrollments and seven pending, which is the largest increase for a grade.