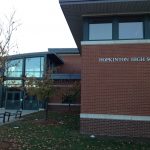 Hopkinton Interim Superintendent, Dr. Steven Hiersche, is pleased to announce that he and the High School Principal Screening Committee have identified two outstanding candidates for further consideration for the position of Hopkinton High School Principal. The Screening Committee included representation from building level administration, professional teaching staff, as well as a parent and a High School student representative.

The Screening Committee interviewed five applicants. The following candidates (in alphabetical order) will be further considered:

Mr. Michael Cournoyer holds a Master of Education degree in Educational Leadership from Worcester State College, as well as a Bachelor of Science degree in Health Education from the University of Lowell. He is currently the Principal for Holliston High School. He previously served as Assistant Principal of Hopkinton High School, and began his career in education as a high school health teacher at Southbridge High School.

Mr. John Smith holds a Master of Education degree in Educational Leadership from Worcester State College, as well as a Bachelor of Arts in History, from the University of Massachusetts (Amherst). He is currently the Principal for Westborough High School. He previously served as Principal and Assistant Principal/Dean of Students for Nashoba Regional High School. He began his career in education as a social studies teacher at Notre Dame Preparatory School in Fitchburg.

The finalists will be individually interviewed by the Superintendent and members of the administrative team this week, and will participate in a Public Forum in early April. Interested faculty, staff, parents, and community members will be invited to attend this forum, and will be given the opportunity to provide feedback to the Superintendent. Public Forum details will be announced later this week, once finalized.