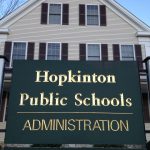 At their meeting on February 28, the School Committee ratified a 3-year contract with the Hopkinton Teachers’ Association. It was ratified by a 5 to 1 vote, with all School Committee members in favor and Town Manager Norman Khumalo opposed. The contract covers September 1, 2012 to August 31, 2015. It includes a 2% wage increase per year, which allows the district to keep its salaries competitive with surrounding communities.

According to a press release the Agreement also provides the Administration with payroll administration changes that will assist in decreasing overhead for payroll processing; a sick leave system for new employees that limits annual accrual; updated FMLA benefit language consistent with changes in federal law; clarification of leave of absence policies to allow the administration to better manage the resulting staffing coverage issues; and provisions allowing the Town to implement changes in health insurance plan design consistent with the legislative reforms and at the same time as any such changes are implemented for other Town employees.

The contract had been in the negotiation for a long time and had to go to mediation. Interim Superintendent, Dr. Steven Hiersche said, “Although it was, at times, a difficult process, all parties worked together to craft an agreement that is ultimately in the best interest of the students of the Hopkinton Public Schools, while recognizing the contributions of our valued professional teaching staff and honoring the current financial constraints of the Town.”