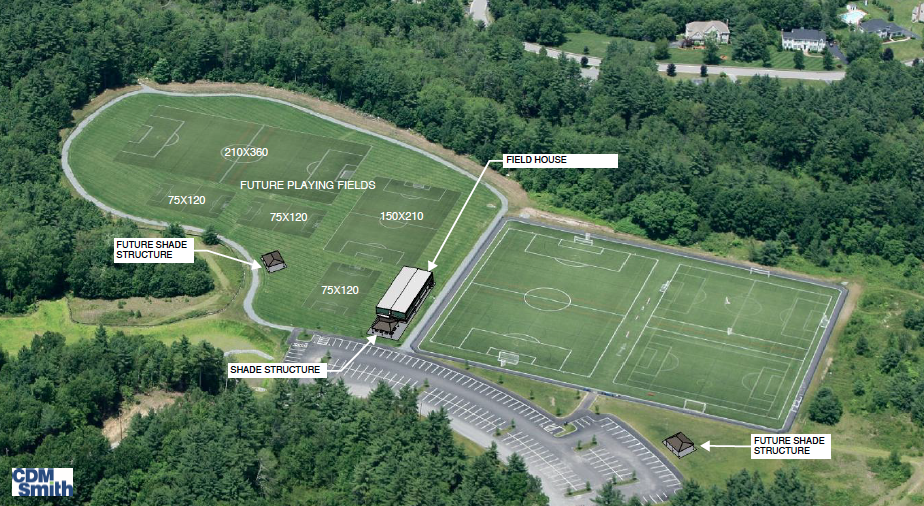 The Parks and Recreation Commission sponsored Article 8 of the Special Town Meeting to appropriate $500,000 to build an indoor practice and recreation facility on the Fruit street Athletic Field Complex.  If passed, the athletic facility will be connected to the pavillion which was already approved for construction funding at the May Annual Town Meeting.  While the pavilion will include rest rooms, concessions, and storage space, the indoor indoor practice facility was intended as stage two of the project, and was scrapped from the May meeting because of some unclear wording in the text of the original draft warrant. Additionally, the phase one part of the project used money from the Community Preservation Act, which an indoor practice facility could not.

According to Parks and Recreation Director, Jay Guelfi,  “Our feeling is that building the entire structure at once will be more economically and operationally efficient.”  Parks and Recreation has been working with an engineering firm for the plans for the front half of the building that was already approved, but they hope if this article passes at Special Town Meeting, that they will be able to construct the entire facility at once.  They would reportedly save the town money by avoiding having to set up a construction area twice if they can build it in its entirety now.

The facility is expected to serve the needs of in-town sports teams at a low cost and be available for private youth sports groups such as private club softball, baseball, soccer and lacrosse groups to rent, which could generate significant revenue to sustain and fully maintain the building and facilities.  Parks and Rec also plans to use the proposed facility to start some new town programs such as volleyball and wrestling.

Like the proposed new school, this building will be funded by a debt exclusion and will require both a 2/3 vote at the October 26 Special Town Meeting and a simple majority vote at the November 9 Special Election.  Because of the massive difference in cost between this and the proposed new school, this project would have a much smaller taxpayer impact per $500,000 of assessed property value.