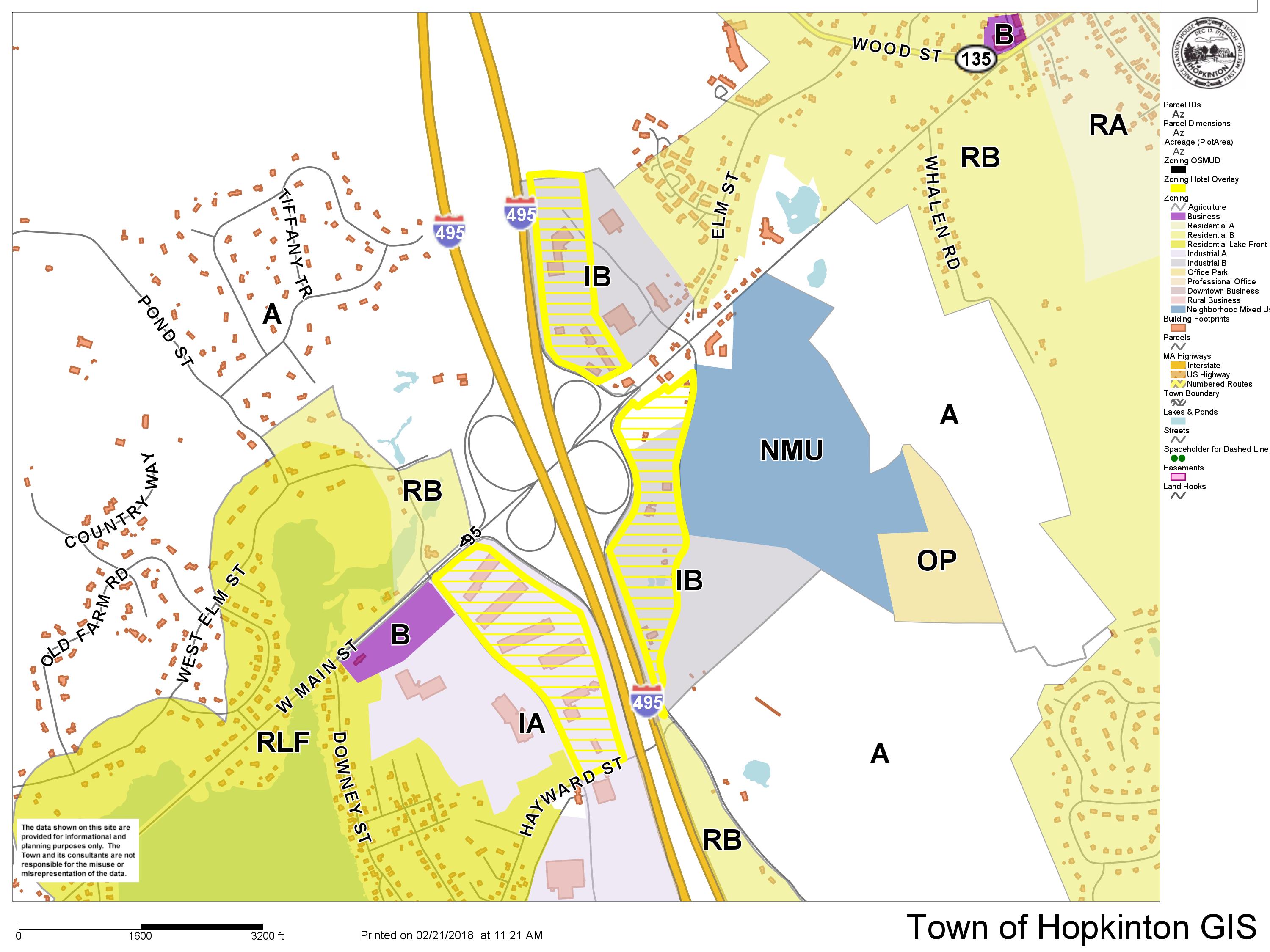 Amend Zoning Bylaw Section 210-125, Conversions of Residential Property.
The “Conversions” bylaw (adopted in 1991) currently allows the conversion of a single family home into up to 4 rental units by Special Permit. The Board of Appeals asked the ZAC to review this bylaw, specifically whether owner occupancy should be required and whether the maximum number of units should be changed. After discussion, the ZAC recommended that owner occupancy be required, and to reduce the maximum number of units to 2. The proposed amendment would make those changes.

Hotel Overlay District Area.
The Chamber of Commerce requested that the ZAC review the location of the Hotel Overlay District (HOD), in order to include areas that are viable for a hotel. The ZAC recommended expansion in two areas and a reduction in another, as noted below. As an “overlay” district, the HOD is overlays the underlying zoning district, which is either Industrial A or Industrial B, depending on location.

Maximum Height Terminology.
At the present time, the Zoning Bylaw refers to the maximum height in the Industrial A and B districts as x feet or x stories, whichever is less. The proposed change would remove the reference to the number of stories in order to alleviate confusion, recognize changes in building and infrastructure technology and to allow for interior design flexibility (large open spaces, lofts, mezzanines, etc.). If revised, the bylaw would regulate the maximum height of a building in feet only. The number of feet specified would not change – it is presently 45 feet in the Industrial B District and 60 feet within the Industrial A District (except within 400 feet of Hayward St., where the maximum height is 40 feet).

Maximum Height of Buildings in One Portion of Industrial B District.
This proposed change would increase the maximum height of buildings within a portion of the Industrial B District located in the Elm Street/Parkwood Drive area. It would apply to the portion within the Hotel Overlay District only (either in its current location or expanded as proposed above), and the increase would be from the current 45 feet to 60 feet. The ZAC recommended the change so as to allow for additional commercial development/redevelopment within this already developed area. This would allow more opportunities for buildings to go “up” rather than “out”, reducing impervious surface.

Accessory Family Dwelling Units.
Prompted by a request from the Board of Appeals, the ZAC has recommended significant changes to the accessory family dwelling unit bylaw. Sometimes called “accessory apartments”, these are separate but connected units in single family homes that can accommodate a family member or residents over 60. Presently, all such units require a special permit from the Board of Appeals. The proposed changes would establish two categories of units: 1) by right units, limited to a maximum of 800 sq. ft. located entirely within a single family home; 2) other units, such as one that is larger than 800 sq. ft. or located in a detached building for example, provided that units cannot exceed 1,000 sq. ft. or a third of the area of the single family home. The intent is to allow the small units by right that are routinely approved – it was felt that the strict scrutiny required of a special permit process is not required. The special permit process would be retained for those circumstances where greater scrutiny is needed.

Recreational Marijuana.
The proposed article would repeal the temporary moratorium on recreational marijuana establishments adopted at the 2017 annual town meeting, and replace it with a new zoning bylaw that prohibits all types of recreational marijuana establishments within the Town. This completes the process the Town has undertaken to prohibit the uses. The proposed bylaw does not affect medical marijuana facilities – such uses are presently allowed and will continue to be allowed.

Lighting:
The Planning Board proposes to regulate non-residential lighting that shines out of windows at night when businesses are closed, either through the site plan review process or by a bylaw that applies to all non-residential uses.

Conform to Changes in State Statute:
Two proposed articles would amend the Zoning Bylaw to conform to recent changes to the state Zoning Act:

Previously, immunity was available only if construction or operations were undertaken within 6 months.

Fine for Zoning Violations:
The statute allows municipalities to assess a penalty of not more than $300 per violation for zoning violations. Currently, the Zoning Bylaw lists a penalty of $100 per violation. The proposed amendment would allow the Town to take advantage of the statutory provision.

Author: Amy Ritterbusch
Filed Under: Land Use, Town Meeting 2018
Tags: Planning Board, Public Hearing, Zoning
Spotlight on Town Growth & Development
Board of Selectmen – Did You Know?