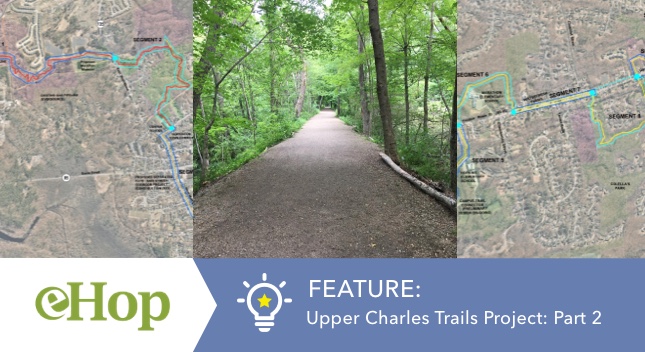 The Upper Charles Trail Committee released their proposed route for the Hopkinton portion of the trail in August 2021.

The above proposed Trail Map contains a total of 11 segments that connect Hopkinton State Park and Legacy Farms via Segment 1 all the way to the Upper Charles Trail parking off Rte 85 at the border of the 3 towns – Hopkinton, Holliston and Milford.

Several ‘sub-projects’ relating to development of these segments are important aspects of the main project and specific segment designs come with their own set of challenges, design considerations and impacts.

A progress report of the project was presented during a public hearing on December 8th.

A few of the segments that have been actively discussed and debated are listed below. They are in different phases of the overall main project.

“Campus Trail Connector” was proposed by UCTC as a connecting trail for the Hopkinton High School, Middle School, Hopkins School and the new Marathon Elementary School. On July 29, 2020, The Upper Charles Trail Committee was awarded a MA Trails Grant to undertake engineering studies for the Campus Trail Project.

In Segment 6, which includes EMC Park and Marathon School, UCTC aims to conduct the same level of design as Segment 5 and hopes to receive a MassTrails grant in 2022 to do so. This project is also a direct extension of the ‘Campus Trail Connector’.

This memo was originally prepared as a draft in 2016 and has recently been updated for the Town’s review. The purpose of this memo is to assist inform the Town in deciding whether or not to pursue a bridge over Hayden Rowe Street.

The anticipated cost for the bridge specifically is roughly $500,000. There are additional costs noted in the VHB report for other portions of trail work. 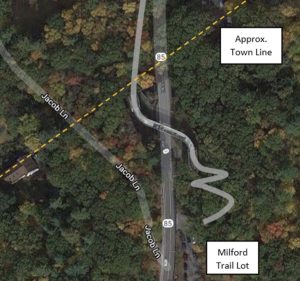 An alternative trail route by the Hopkinton Trails Club was proposed later in response to some of the potential drawbacks regarding specific portions of the Upper Charles Trail (segments 5 to 11). These are detailed in Part 3 of the article – ‘An Alternative Trail Proposal’

Upper Charles Trail Project – Part 3: An Alternative Proposal to Some Sections of the UC Trail