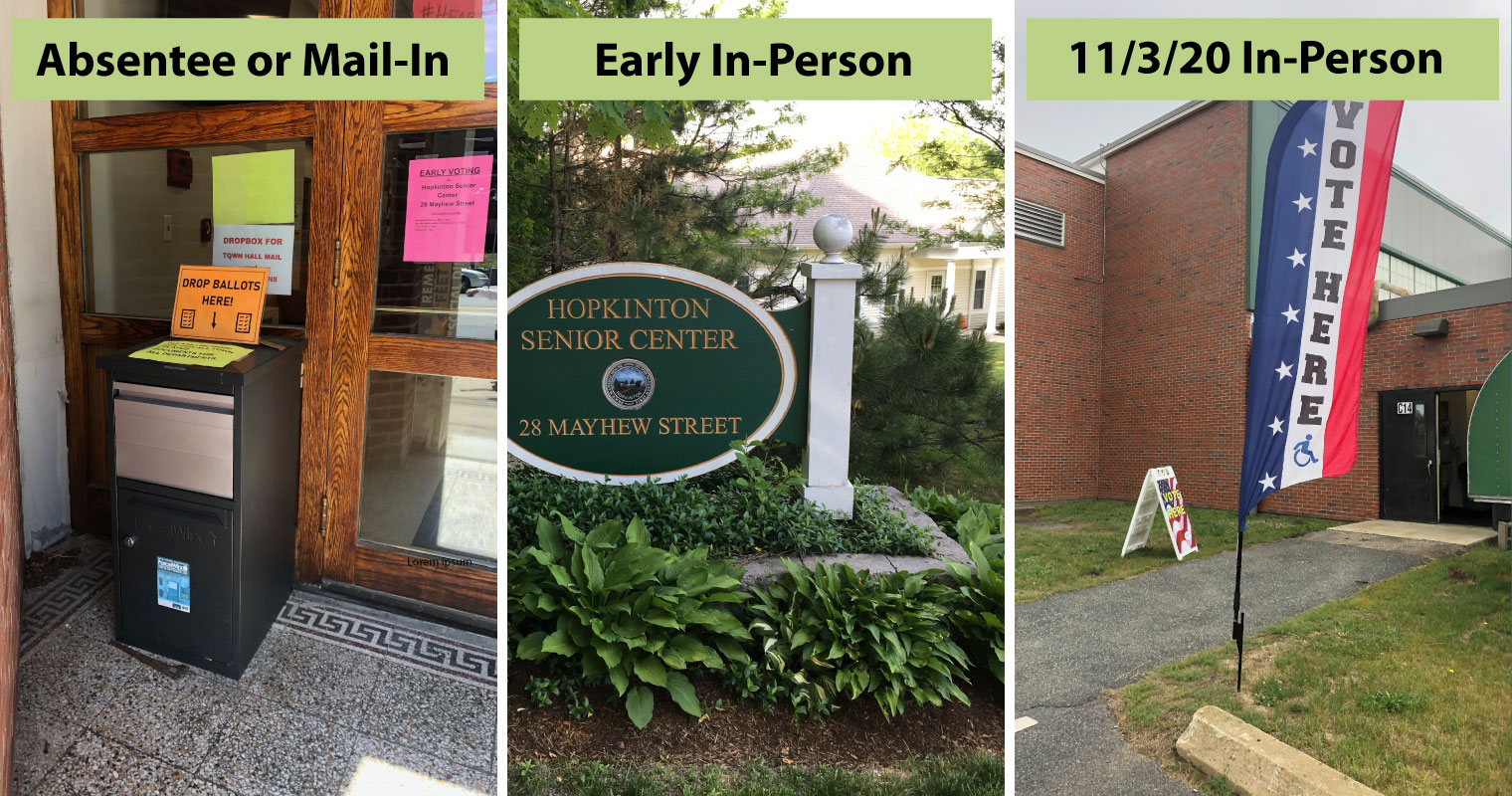 Option 1 – Vote Absentee or by Mail

You should have already requested a mail in ballot in advance.

Early voting in person will be offered from Saturday, October 17 until Friday, October 30 at the Hopkinton Senior Center at 28 Mayhew Street. Mask wearing as well as social distancing will be required to protect our dedicated team of election staff and fellow voters. The hours for each day at the Senior Center will be as follows:

Option 3 – Vote on Election Day at the Middle School

Mask wearing as well as social distancing will be required to protect our dedicated team of election staff and fellow voters.

What’s on the November 3 Ballot for Hopkinton?

ELECTORS OF PRESIDENT AND VICE PRESIDENT

Do you approve of a law summarized below, on which no vote was taken by the Senate or the House of Representatives on or before May 5, 2020?

SUMMARY
This proposed law would require that motor vehicle owners and independent repair facilities be provided with expanded access to mechanical data related to vehicle maintenance and repair. Starting with model year 2022, the proposed law would require manufacturers of motor vehicles sold in Massachusetts to equip any such vehicles that use telematics systems–systems that collect and wirelessly transmit mechanical data to a remote server–with a standardized open access data platform. Owners of motor vehicles with telematics systems would get access to mechanical data through a mobile device application. With vehicle owner authorization, independent repair facilities (those not affiliated with a manufacturer) and independent dealerships would be able to retrieve mechanical data from, and send commands to, the vehicle for repair, maintenance, and diagnostic testing. Under the proposed law, manufacturers would not be allowed to require authorization before owners or repair facilities could access mechanical data stored in a motor vehicle’s on-board diagnostic system, except through an authorization process standardized across all makes and models and administered by an entity unaffiliated with the manufacturer. The proposed law would require the Attorney General to prepare a notice for prospective motor vehicle owners and lessees explaining telematics systems and the proposed law’s requirements concerning access to the vehicle’s mechanical data. Under the proposed law, dealers would have to provide prospective owners with, and prospective owners would have to acknowledge receipt of, the notice before buying or leasing a vehicle. Failure to comply with these notice requirements would subject motor vehicle dealers to sanctions by the applicable licensing authority. Motor vehicle owners and independent repair facilities could enforce this law through state consumer protection laws and recover civil penalties of the greater of treble damages or $10,000 per violation.

Do you approve of a law summarized below, on which no vote was taken by the Senate or the House of Representatives on or before May 5, 2020?

SUMMARY
This proposed law would implement a voting system known as ‘ranked-choice voting,’ in which voters rank one or more candidates by order of preference. Ranked-choice voting would be used in primary and general elections for all Massachusetts statewide offices, state legislative offices, federal congressional offices, and certain other offices beginning in 2022. Ranked-choice voting would not be used in elections for president, county commissioner, or regional district school committee member. Under the proposed law, votes would be counted in a series of rounds. In the first round, if one candidate received more than 50 percent of the first-place votes, that candidate would be declared the winner and no other rounds would be necessary. If no candidate received more than 50 percent of the first-place votes, then the candidate or candidates who received the fewest first-place votes would be eliminated and, in the next round, each vote for an eliminated candidate would instead be counted toward the next highest-ranked candidate on that voter’s ballot. Depending on the number of candidates, additional rounds of counting could occur, with the last-place candidate or candidates in each round being eliminated and the votes for an eliminated candidate going to the voter’s next choice out of the remaining candidates. A tie for last place in any round would be broken by comparing the tied candidates’ support in earlier rounds. Ultimately, the candidate who was, out of the remaining candidates, the preference of a majority of voters would be declared the winner. Ranked-choice voting would be used only in races where a single candidate is to be declared the winner and not in races where more than one person is to be elected. Under the proposed law, if no candidate received more than 50 percent of first-place votes in the first round, the rounds of ballot-counting necessary for ranked-choice voting would be conducted at a central tabulation facility. At the facility, voters’ rankings would be entered into a computer, which would then be used to calculate the results of each round of the counting process. The proposed law provides that candidates in a statewide or district election would have at least three days to request a recount. The Secretary of State would be required to issue regulations to implement the proposed law and conduct a voter education campaign about the ranked-choice voting process. The proposed law would take effect on January 1, 2022.