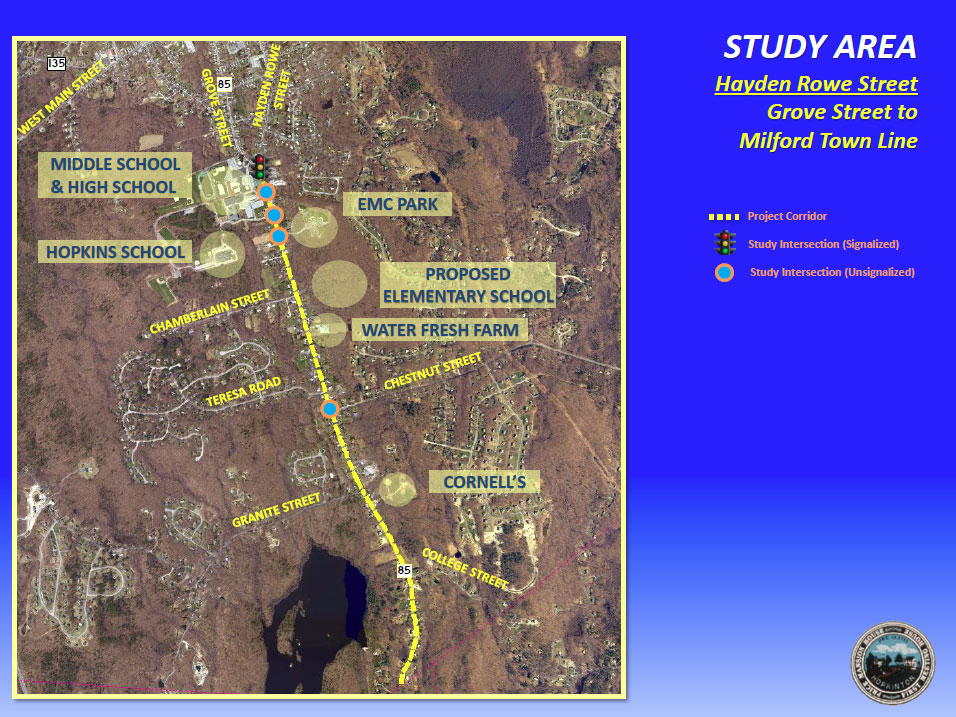 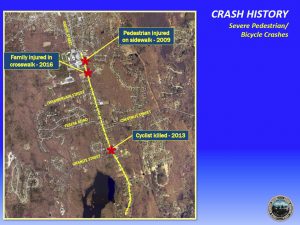 On Wednesday, February 15, the Town hosted a public workshop at Hopkinton High School to share preliminary information about the Hayden Rowe Corridor Study and gather input from residents.  In November 2016 the School Committee and the Department of Public Works allocated $20,000 each to study traffic and pedestrian safety on Hayden Rowe between Grove Street and the Milford town line.  The study was funded in response to two serious pedestrian and bicycle crashes on Hayden Rowe in recent years, an increase in concerns raised by residents to the Board of Selectmen, and in preparation for the new elementary school to open in the fall of 2018.   Many town leaders are involved including John Westerling, Director of the DPW, Police Chief Lee, Fire Chief Slaman, Norman Khumalo, Town Manager, Elaine Lazarus, Director of Land Use and Town Operations, Dave Daltorio, Town Engineer, and Dr. Cathy MacLeod, School Superintendent.  The goal of the project is to study, identify, and implement appropriate traffic calming measures that will allow traffic to move efficiently and effectively along Hayden Rowe while improving safety for motorists and pedestrians.

The workshop began with welcoming remarks by Town Manager, Norman Khumalo, who stressed the importance of community input in the process. John Westerling then introduced three consultants from World Tech Engineering who ran the workshop.  The agenda covered project need, project history, existing conditions, crash history, potential improvements, and community input.  Slides were presented with background and data.  A second workshop is planned for mid-March at which time a conceptual plan will be presented. Ultimately, the findings and recommendations will be presented at Annual Town Meeting for a vote.  John Westerling encouraged anyone who would like to provide ideas, suggestions, and/or ask questions to reach out to him directly by email at jwesterling@hopkintonma.gov or by phone at 508-497-9740.

Traffic backups and safety hazards at the intersection of Chestnut Street and Hayden Rowe were discussed.   The consultants have found that the intersection meets the warrants set by the State for a traffic signal.  (The Manual on Uniform Traffic Control Devices  — MUTCD — is a document issued by the Federal Highway Administration of the United States Department of Transportation to specify the standards by which traffic signs, road surface markings, and signals are designed, installed, and used.  It specifies when towns can or can’t add a traffic signal, based on traffic volume, accident history, and a number of factors.)  According to the presenters, the state would allow a traffic signal at this intersection.  The presenters advised that a traffic signal would reduce angle crashes, improve operations, and provide gaps in traffic.  It was noted that adding a signal would help organize traffic rather than slow traffic.

Several residents described long delays and safety hazards when turning left out of Theresa Road and Chamberlain Street onto Hayden Rowe.  There was also concern about the potential impact of a possible development being considered between Chamberlain and Whalen and how this could impact Chamberlain and Hayden Rowe.  Ken Weismantel, Chair of the Planning Board, commented that apps such as Waze and Google Maps send drivers through residential cut-throughs.  The presenters stated that they are basing their research and findings on traffic projections for 2024 and they are aware of the possible Chamberlain/Whalen development.

The 40 MPH speed limit near EMC Park was discussed.  Several residents said they think the speed limit is too high and should be reduced.   The presenters explained that in order to reduce a posted speed limit, the state requires the town to do a traffic study and report back on the driving speed of 85% of drivers. The state then sets the speed limit to match the speed at which 85% of motorists are driving.  For example, if the study finds that 85% of drivers are traveling at 50 MPH, the state would raise the speed limit to 50 MPH instead of lowering it.   As the town’s goal is to reduce the speed of traffic on Hayden Rowe, the presenters recommend implementing traffic calming measures first, reducing driving speeds, and then conducting a study to ensure that the results show slower speeds.  This will reduce the risk of the state increasing the speed limit exactly where the town wants to decrease it.  To read more about MassDOT’s Policy on Speed Zoning click here.  One alternative was mentioned – there is the possibility of making the stretch of Hayden Rowe between the new school and the Middle School an official School Zone which would require a 20 MPH speed limit when students are present (note that the 20 MPH speed limit is only applicable when school is in session).  However, the state’s School Zone guidelines limit these zone to 300 feet from a school building holding Grades 1-8 only.  As high schools are not included in the official state regulated school zones, an exception would need to be made by the State granting Hopkinton permission to extend the School Zone from the new elementary school, past the High School, and to the Middle School.

At least two residents commented that the Police Department’s mobile speed radar is extremely effective in slowing traffic in front of EMC Park.  The police acknowledged this.  The Town owns two mobile units and they are reserved for various locations around town.   New mobile speed radar units cost $7,000 each.

John Coutinho, member of the Board of  Selectmen, stressed the importance of going to Annual Town Meeting to vote on the final recommendations.  The final plan must pass by a majority vote to be funded and implemented.   Annual Town Meeting begins on Monday, May 1 at 7 pm in the Middle School Auditorium.

John Westerling concluded the workshop at 9 pm, thanking town officials and residents for their input.