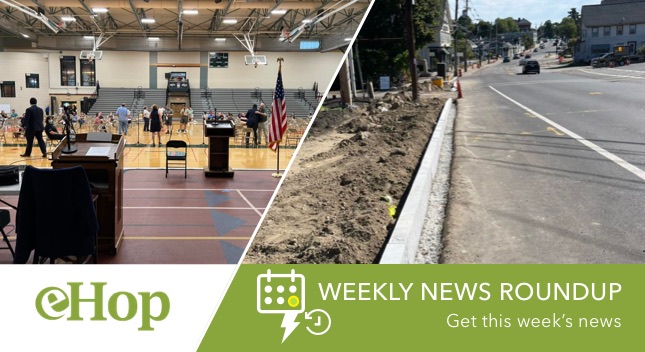 Thursday’s Special Town Meeting was short and to the point, and an overwhelming majority of attendees supported allocating funds to cover the increase in construction costs for the addition to Marathon School.

There was a strong turnout — at 276 residents, it was about double the total at Annual Town Meeting in May.

Marathon School Addition of 4 Classrooms – Cost Increase of $850,000 – funds for this purpose are proposed to be transferred from the School Department Stabilization Fund
Motion to Approve PASSED by a 2/3 Majority Voice Vote

East Side of Project and Project Wide

Estimated work hours will be from 7am to 7pm.

There is a state primary election coming up on September 6 and there are many ways to vote this year including Absentee/Mail-In Voting, Early In-Person Voting and In-Person on Election Day. There are several contested races this year, including the race for Hopkinton’s State Rep, to replace Carolyn Dykema who is not running again.  Candidates are:

Read more about the candidates, view sample ballots and early voting dates on the eHop website.

The Upper Charles Trail Committee at its meeting Wednesday night unanimously approved a list of 10 priorities on which the group will focus during the 2023 fiscal year, with members choosing where to devote their energies as part of two-person working groups.

Member Eli Post noted that the first five goals had been approved by the Upper Charles Trail Committee (UCTC) at its last meeting.