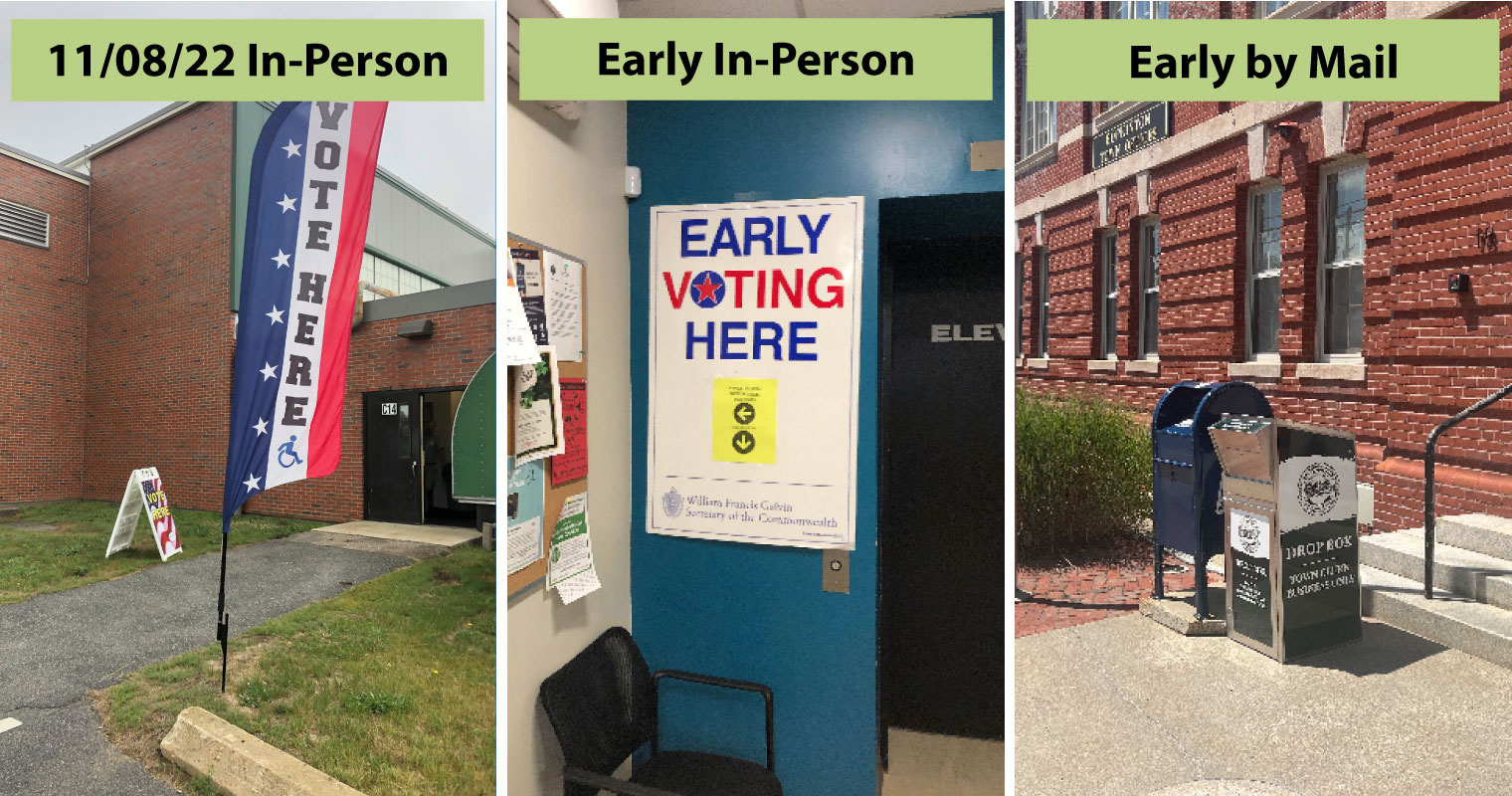 There is no school on Tuesday, November 8 due to a Teacher Professional Day timed as usual to coincide with election day. Because the polls are located at the Middle School, this reduces parking & traffic congestion and increases student safety on this busy day. There are four statewide ballot questions this year, in addition to the state midterm election. All Hopkinton precincts vote at the Hopkinton Middle School Brown Gym, 88 Hayden Rowe St, Hopkinton, enter by Grove Street. Polls are open 7:00am-8:00pm.

Unlike absentee voting, early vote by mail requires no excuse. You will receive your application by mail. The application submission deadline is November 1 but you’re advised to submit it earlier to allow time to receive your ballot, fill it out, and submit it on time. You may either mail your ballot or drop it into the special box in front of Town Hall. Once you submit your ballot you may track your ballot online.

ON THE NOVEMBER 8 BALLOT FOR HOPKINTON RESIDENTS:

GOVERNOR AND LIEUTENANT GOVERNOR, Vote for not more than 1

ATTORNEY GENERAL, Vote for not more than 1

SECRETARY OF STATE, VOTE FOR NOT MORE THAN 1

TREASURER, VOTE FOR NOT MORE THAN 1

AUDITOR, VOTE FOR NOT MORE THAN 1

REPRESENTATIVE IN CONGRESS Second DISTRICT, VOTE FOR NOT MORE THAN 1

COUNCILLOR SECOND DISTRICT, VOTE FOR NOT MORE THAN 1

SENATOR IN GENERAL COURT SECOND MIDDLESEX & NORFOLK DISTRICT, VOTE FOR NOT MORE THAN 1

REPRESENTATIVE IN GENERAL COURT EIGHTH MIDDLESEX DISTRICT, VOTE FOR NOT MORE THAN 1

DISTRICT ATTORNEY NORTHERN DISTRICT, VOTE FOR NOT MORE THAN 1

SHERIFF MIDDLESEX COUNTY, VOTE FOR NOT MORE THAN 1

QUESTION 1: Proposed Amendment to the Constitution

This proposed constitutional amendment would establish an additional 4% state income tax on that portion of annual taxable income in excess of $1 million. This income level would be adjusted annually, by the same method used for federal income-tax brackets, to reflect increases in the cost of living. Revenues from this tax would be used, subject to appropriation by the state Legislature, for public education, public colleges and universities; and for the repair and maintenance of roads, bridges, and public transportation. The proposed amendment would apply to tax years beginning on or after January 1, 2023.

Do you approve of a law summarized below, on which no vote was taken by the Senate or the House of
Representatives on or before May 3, 2022?

This proposed law would direct the Commissioner of the Massachusetts Division of Insurance to approve or disapprove the rates of dental benefit plans and would require that a dental insurance carrier meet an annual aggregate medical loss ratio for its covered dental benefit plans of 83 percent. The medical loss ratio would measure the amount of premium dollars a dental insurance carrier spends on its members’ dental expenses and quality improvements, as opposed to administrative expenses. If a carrier’s annual aggregate medical loss ratio is less than 83 percent, the carrier would be required to refund the excess premiums to its covered individuals and groups. The proposed law would allow the Commissioner to waive or adjust the refunds only if it is determined that issuing refunds would result in financial impairment for the carrier…

A YES VOTE would regulate dental insurance rates, including by requiring companies to spend at least 83% of premiums on member dental expenses and quality improvements instead of administrative expenses, and by making other changes to dental insurance regulations. https://www.fairdentalinsurance.org/

A NO VOTE would make no change in the law relative to the regulations that apply to dental insurance companies. https://protectmydentalcare.com/

Do you approve of a law summarized below, on which no vote was taken by the Senate or the House of Representatives on or before May 3, 2022?

A YES VOTE would increase the number of licenses a retailer could have for the sale of alcoholic beverages to be consumed off premises, limit the number of “all-alcoholic beverages” licenses that a retailer could acquire, restrict use of self-checkout, and require retailers to accept customers’ out-of-state identification. https://www.masspack.org/

A NO VOTE would make no change in the laws governing the retail sale of alcoholic beverages. https://www.foodstoresma.org/

QUESTION 4: REFERENDUM ON AN EXISTING LAW

Do you approve of a law summarized below, which was approved by the House of Representatives and the Senate on May 26, 2022?

A YES VOTE would keep in place the law, which would allow Massachusetts residents who cannot provide proof of lawful presence in the United States to obtain a driver’s license or permit if they meet the other requirements for doing so. https://saferroadsma.com/

A NO VOTE would repeal this law. https://www.fairandsecurema.com/