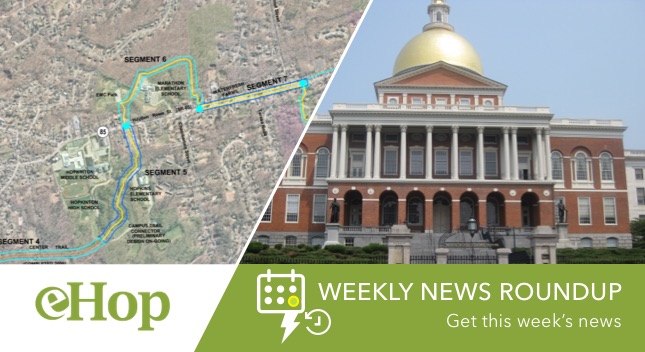 State Representative for the 8th Middlesex District is a contested race in the State Election this year. There are two Candidates vying for the open seat, after Carolyn Dykema resigned this year.

Arena-DeRosa, of Holliston, cleared the Democratic primary against Hopkinton Town Clerk Connor Degan, winning about 57% of the vote. Barnes ran unopposed for the Republican nomination.

There is no school on Tuesday, November 8 due to a Teacher Professional Day timed as usual to coincide with election day. Because the polls are located at the Middle School, this reduces parking & traffic congestion and increases student safety on this busy day. There are four statewide ballot questions this year, in addition to the state midterm election. All Hopkinton precincts vote at the Hopkinton Middle School Brown Gym, 88 Hayden Rowe St, Hopkinton, enter by Grove Street. Polls are open 7:00am-8:00pm.

eHop is a 501(c)(4) civic league that undertakes public service activities within the Town of Hopkinton. We have been fortunate to have received a Boston Marathon invitational entry from the Town of Hopkinton in previous years. Each year eHop has used the fundraising revenue from our entry to specifically fund civic activities to support the town such as nonpartisan voter information and publicity for Hopkinton Town Meeting, including signs, banners, social media ads, newspaper ads, a website and a postcard mailed to every registered voter in Hopkinton with the date of Annual Town Meeting. eHop’s budget is posted publicly on our website, with our largest expense being the postcard mailing to the household of every registered voter. About 90 percent of our budget relates directly to supporting Town Meeting.

We had hoped to fundraise $5,000 this year from a Boston Marathon invitational entry, but now at the last minute we are faced with the choice of having to organize another type of fundraiser on the fly or cutting our budget drastically.

The town announced Thursday that in response to concerns about a stretch of the recently reconfigured Main Street being too narrow to allow for emergency vehicles to pass through traffic, the road will be widened.

“The construction plans call for the narrowest portion of these stretches to be 28 feet in width from curb to curb, which is a common size for roadways in Massachusetts. Other portions of the road are 33 feet in width.

The School Committee on Thursday accepted a power purchase agreement with Solect Energy Development previously passed by the Select Board.

The 20-year pact is for the installation of rooftop photovoltaic projects at Hopkins School, the middle school and the high school.

In other business, the board once again talked about incorporating two mental health days as absences in the school policy. School Committee member Holly Morand suggested the measure several weeks ago, noting that there is a bill pending in the Massachusetts legislature on the topic.

ZAC hears input from community on drafted Planning Board articles

The Zoning Advisory Committee at its virtual Monday night meeting took public comment on items people would like to see addressed in zoning policy, including three drafted articles discussed at last week’s Planning Board meeting. The Planning Board’s drafted article on a rooftop solar equipment was approved by ZAC, while its proposed articles on electric charging stations in new or altered parking lots and for flexible community development were held for further ZAC consideration.

Board of Health voices support for safe firearm storage initiative

The Board of Health at its meeting Monday evening unanimously voted to support the efforts of Be SMART, a public safety initiative to promote safe firearm storage and prevent accidental injuries and deaths.

A team of Be SMART members spoke before the board about the importance of gun safety measures and asked for support. The members also are involved in the recently formed Hopkinton chapter of Moms Demand Action, a nationwide grassroots effort to promote public safety that will aid in preventing gun violence.

Positions for the Youth Commission and Personnel Committee, appointed by Town boards & committees have vacancies at the present time.

Interested residents must apply via the Online Volunteer form here:

Representatives from Altaeros Energies presented to the Select Board on Tuesday about their company and discussed the possibility of relocating to South Street if it was able to receive support via a tax increment financing (TIF) agreement, special permits and other incentives.

The board approved Town Manager Norman Khumalo to open negotiations with the company.

The town’s latest water test indicated a PFAS reading above the maximum allowed by the state, Khumalo reported. He said the town continues to move forward with the proposed connection to the Massachusetts Water Resources Authority (MWRA) pipeline via Southborough. The MWRA is waiving the connection fee for towns with PFAS issues, which will save the town about $11.7 million, Khumalo added.

The Conservation Commission at its 90-minute meeting Tuesday night unanimously approved a request by the Department of Public Works for an 8-foot winter drawdown of Lake Maspenock for two weeks as a strategy to control invasive weed growth.

Last month, the commission approved an initial standard drawdown of the lake to gauge its effectiveness in curbing weed growth.

The commission discussed and voted on five project proposals that have been submitted to the CPC. All projects received unanimous approval.

Resident Amy Groves noted that at the previous night’s Select Board meeting, three individuals spoke during the public forum and requested a stop work order on the preliminary study. She attended the UCTC meeting to add her objections to what has been a contentious debate over the past several months over the proposed route, which would cross busy Hayden Rowe Street (Route 85) multiple times.

Select Board Member Irfan Nasrullah, who is the board’s UCTC designee, acknowledged that three people spoke in favor of halting the study during the open meeting portion of the Select Board meeting.

Nasrullah added that the Select Board has neither discussed this nor decided on taking any action at this time. He said the Select Board originally directed the UCTC to explore trail options, so it is waiting for that information.

Town Manager Norman Khumalo and Town Engineer Dave Daltorio wish to update residents on the ongoing Main Street Corridor Project, specifically about concerns raised regarding emergency vehicle access between the stretches of Main Street from Commonwealth Avenue to Mayhew Street and from Summer Street to the Fire Station.

East Side of Project