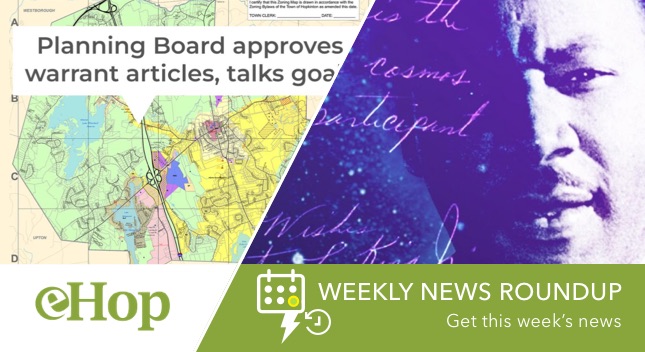 Chief William Miller would like to remind residents that open burning season begins Jan. 15 and runs through May 1. A permit is required to open burn in compliance with Massachusetts law.

Congressman James McGovern, whose district includes Hopkinton, stopped at Town Hall on Friday along with state Rep. James Arena-DeRosa to receive an update on the goings-on in town from Hopkinton officials. Among the items discussed were Hopkinton’s plan to connect to the Massachusetts Water Resource Authority water supply, a desire to add sidewalks across town, and the hope to extend the Upper Charles Trail through town.

The Parks & Recreation Commission at its two-hour hybrid meeting Thursday evening received an overview of the revised design plans for the public pickleball courts slated to be built off of Fruit Street, across from the dog park.

Consultant Andrew Leonard explained that the plan includes four permanent pickleball courts with permanent nets. Four others will have an overlay so they can be converted into a tennis court.

The other major issue raised before the commission was a proposal by Daniel Vickers, the owner of and instructor at the Greater Boston Climbing School, to use College Rock for commercial rock climbing instruction and guided trips. He is a member of the American Mountain Guides Association. He said that College Rock one of two areas within an hour of Boston that is particularly suitable for traditional climbing (often called “trad climbing”). This style allows a climber to place gear on the rock that can be removed, as opposed to using ropes.

Guelfi said that cricket is “coming like a freight train” since the cricket pitch presentation last month to the Community Preservation Commission for a $1 million funding request that will go before Town Meeting. A group recently approached him to start a youth cricket league.

The original plan for reductions had speech and physical therapy services also affected. However, at the last School Committee meeting, the superintendent said the only remaining reduction would be in occupational therapy, going from a suggested cut of 0.8 worth of a staff position to 0.4. The cost for that would be around $32,000.

Whether the Hopkinton School Committee chooses to make the proposed Elmwood School house Grades 2-3 or Grades 2-3-4, it would cost between $280 million and $302 million for work on the other schools to handle population growth — so says a system-wide study conducted by Perkins Eastman and Vertex commissioned by the committee.

Vertex Senior Project Manager Christopher Eberly said although the study is independent of the Elmwood School project, “They inform each other, and it’s a companion piece to it.”

Robert Bell, Perkins Eastman principal in charge of educational programming, said the district’s modulars and additions have been keeping pace with enrollment. However, in the 10-year projections, they see a “wave” of large enrollment increases on the horizon.

The Planning Board held its first in-person meeting of the post-pandemic era on Monday evening, and it unanimously approved several Town Meeting warrant articles and discussed board goals.

Several proposed articles previously discussed in board meetings were unanimously approved for inclusion in the warrant for Annual Town Meeting on May 1. The larger ones included a proposed change in the town’s inclusionary zoning policy and a policy on electric vehicle (EV) parking requirements.

Larson-Marlowe proposed having some joint working sessions between ZAC and the Planning Board so that they could work in partnership on goals. Currently, ZAC gives occasional presentations to the Planning Board on what members have researched. She said it “opens up the possibility to change the dynamic” of progress.

Peter Bemis, the engineer for The Trails open space mixed use development (OSMUD), appeared before the board presenting additional plans and requesting a continuance, which was approved.

Considering running for local office, but don’t know where to begin? To become a candidate a person must either obtain and submit nomination papers by securing the signatures of 50 Hopkinton registered voters by Monday, March 27, 2023 at 5PM or a person may qualify by being the top vote-getter in one of the town political party caucuses, which are typically held in early April.

View offices for the May 15, 2023 ballot and steps for getting your name on the ballot.

The Massachusetts Department of Transportation (MassDOT) is advancing the I495/I-90 Interchange Improvements Project and has scheduled a virtual Public Information Meeting on the 75% Design of the Fruit Street Bridge & Ramp ES/SE (I90 EB to I-495 SB and I-495 SB to I-90 EB) improvements on January 25 at 6:00 PM. The meeting will begin with a presentation by the project team. Attendees can view plans for the Fruit Street Bridge & Ramp ES/SE and ask questions.

Because only four of the seven commissioners on the Conservation Commission were able to attend Tuesday night’s virtual meeting, the applicants for the Massachusetts Laborers Training property on 37 East Street and The Trails development requested continuances of their hearings, saying that the fate of their longstanding cases should be decided by the full commission.

Ciaramicoli discussed a site violation that she and Inspections Assistant Anna Rogers witnessed on a Dec. 29 site visit to the Turkey Ridge Estates property at 52 Cedar Street Extension, near the Southborough border. She gave a presentation on the subdivision, which she said was on a steep slope. The stormwater consequently runs toward the Sudbury River.

Town Manager Norman Khumalo and Senior Accounting Manager Elizabeth Rourke are pleased to share an opportunity for residents and community organizations to submit projects for consideration to be included in the Fiscal Year 2024 Town Budget.

This process is known as a Participatory Budget, which is a budget for which residents or community organizations can submit projects for consideration to be funded by the town.

In order for Hopkinton to gain access to the Massachusetts Water Resources Authority water supply, it will have to go through Southborough. And that will come at a cost.

Department of Public Works Director John Westerling and Joe Baldiga, chair of the Lake Maspenock Weed Management & Control Advisory Group, appeared before the board to discuss a proposal to use herbicides to address the weed problem in Lake Maspenock.

Members of the Sustainable Green Committee appeared before the board to provide an update on its proposed climate action plan.

The committee recommends a net zero resolution for this year’s Annual Town Meeting.

At Tuesday’s Select Board meeting, board members continued discussions about a proposed regional emergency communication center. While no vote was taken, some board members made it clear they were not ready to support moving forward.

Some residents have expressed reservations about joining the proposed RECC, which would include the towns of Grafton, Southborough and Westborough.

Board member Muriel Kramer said she was not prepared to make a decision, noting that the feasibility study presented to the town was not complete enough. She wants to see the financial impacts on towns that have joined a RECC and how that compares to Hopkinton’s current expenses. She also wants more information on how this proposed RECC would be staffed.

Mannan also brought up a concern that some residents mentioned: the possibility that there would be no staff in the police station overnight. Mannan also noted Hopkinton’s uniqueness among the four towns. 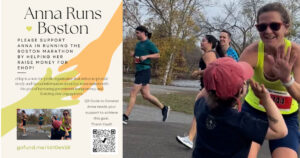 Local civic engagement is important, now more than ever. Civic leagues like eHop provide valuable non-biased non-partisan voter information and engagement. eHop’s annual budget is small, approximately $5,000. A Marathon Invitational Entry Bib from the town of Hopkinton is our one major fundraiser of the year. For the 2022-23 year eHop projected expenses of $5,590.00.