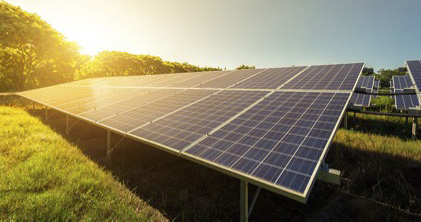 The issue of ground-mounted photovoltaic commercial solar overlay in Hopkinton has been a source of a long and contentious debate for over a couple of years now. The following visual story is broken down by timeline and lays out all events, actions and plans pertaining to the Commercial Solar Bylaw for the 2021 Town Meeting. Along with these snippets, you will also find news article references and video links of discussions recorded by HCAM TV.

For a quick summary of concerns that residents, land owners, town officials in Hopkinton have over this issue, please also see Stakeholder Concerns and Challenges surrounding Solar By-Laws in Hopkinton 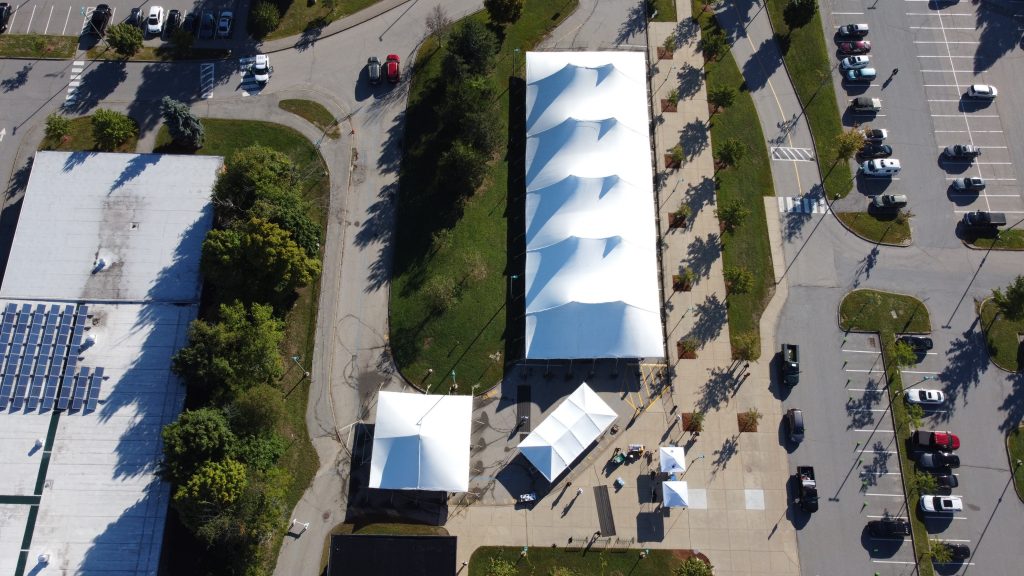 The Planning Board at their March 29, 2021 meeting voted 6-1 in favor of three respective amendments to the solar special permit and stormwater management permit for the proposed 2.4-megawatt solar array off Wilson Street. 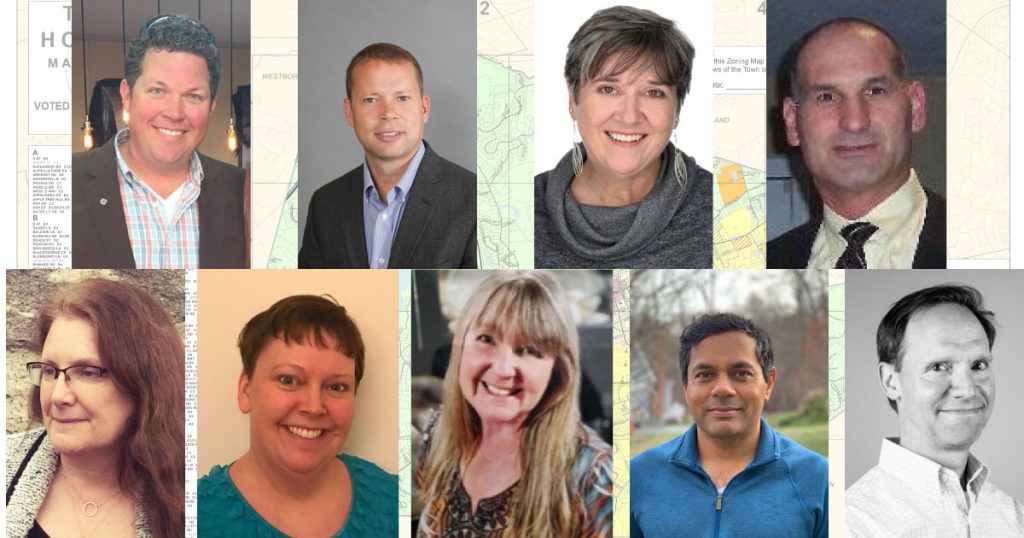 A Planning Board public hearing was held on March 15th, 2021: 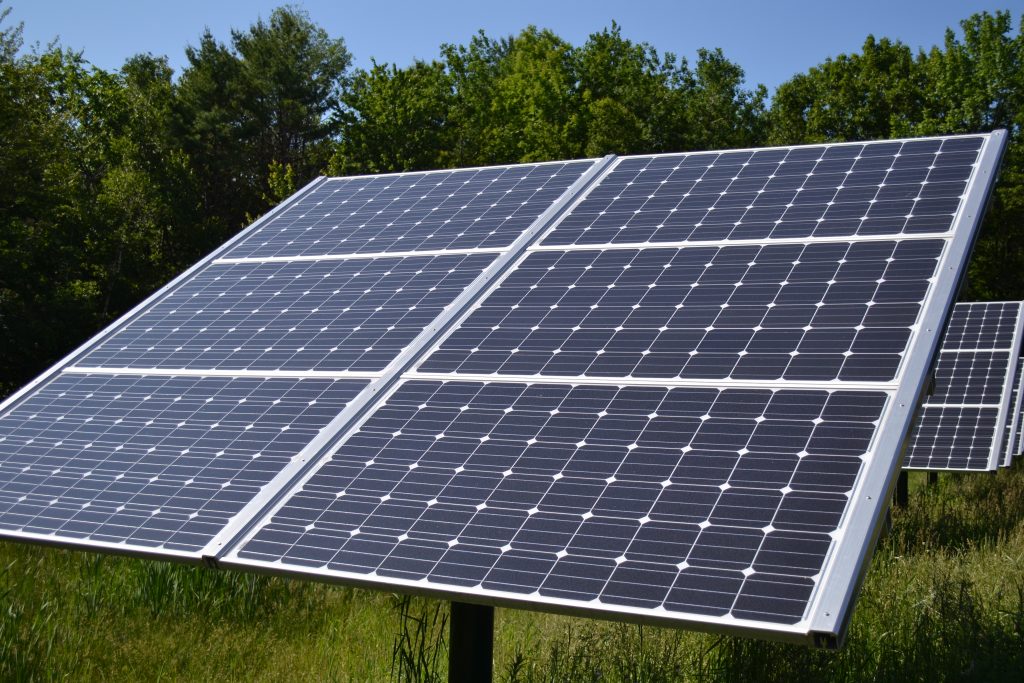 The Conservation Commission at its meeting on Tuesday, March 9 voiced support for Grasshopper Energy to start clearing a limited number of trees as part of its plan to construct a 2.4 megawatt solar array off Wilson Street, but held off on approving larger pieces to the project until more information has been obtained. 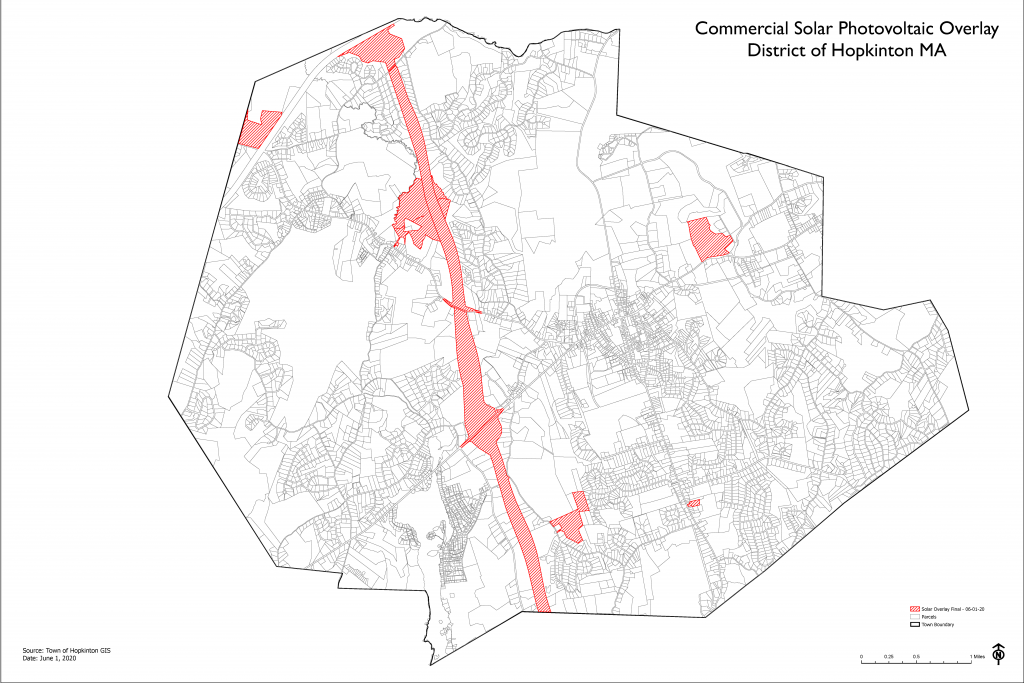 A Planning Board public hearing was held on March 1st, 2021: 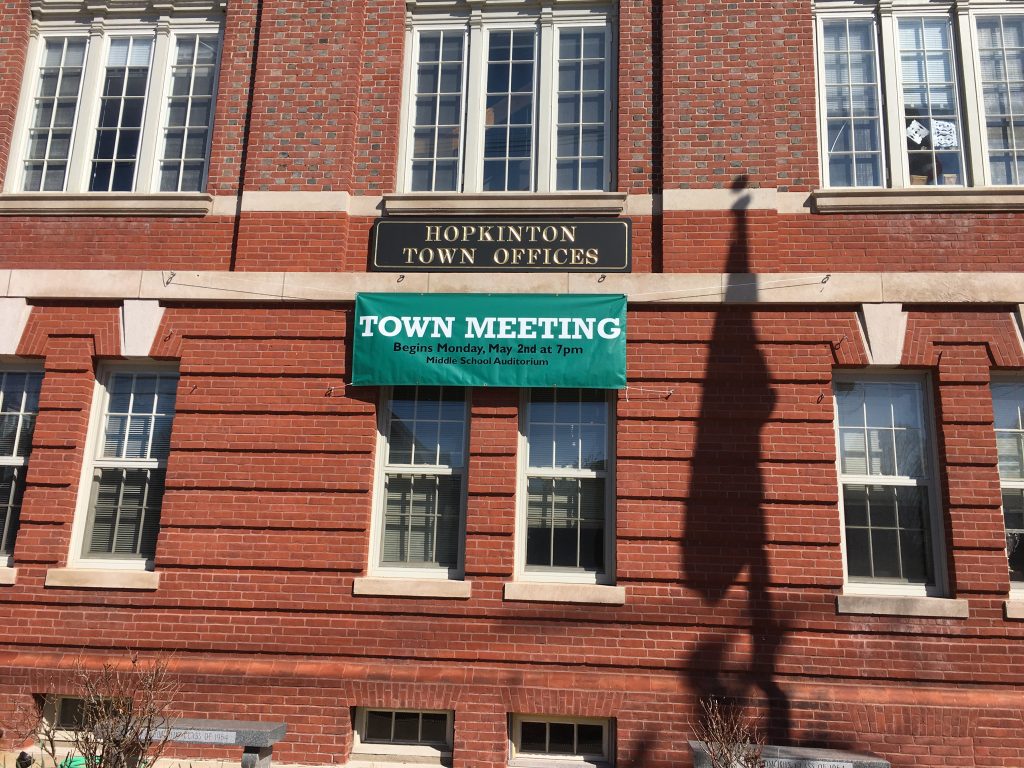 After the Planning board initially reviewed the proposal, members said they were surprised that a new overlay district map wasn’t part of the proposal, and they pushed for the board to reconsider it. The Planning Board voted to hold spots for two commercial zoning articles on the Town Meeting warrant. One for the more aggressive screening rules proposed by ZAC and the other as a placeholder for the overlay district zoning with the understanding that it might be pulled out after further discussion.

The Zoning Advisory Committee is continuing to work on strengthening the bylaw, by changing the percentage of the site area in residential and agricultural zones that can be cleared of trees, bringing it down from 40% to 20%, while leaving business and industrial zones at 70%.

Zoning Committee settles on the final approach to the by-law 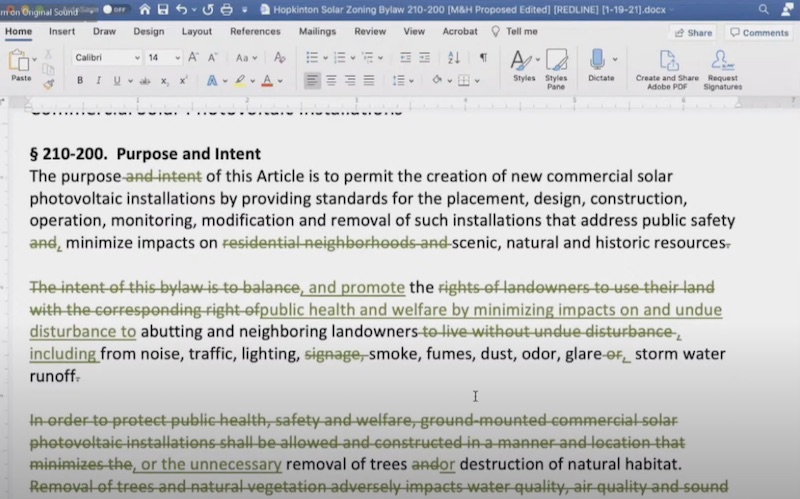 The committee finalized and voted to send it to the Planning Board.

Why did the committee shift focus away from overlay district to screening and tree-cutting bylaws? 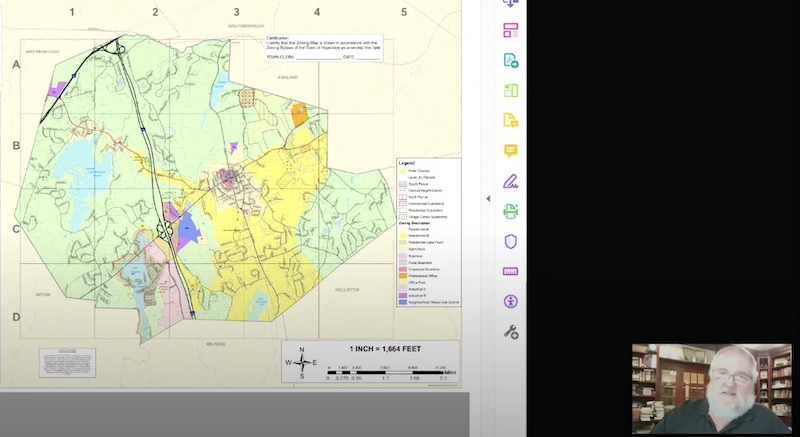 After the initial meetings, the committee had begun further researching and working on both approaches to send to the Planning Board for consideration. The Planning Board would then have more than one plan to consider for the final town warrant.

However, during the ZAC meeting on January 11th, the debate took a different turn when the town counsel advised against a solar overlay district bylaw. The main issues were:

Video Reference – Listen to the discussion against Solar Overlay 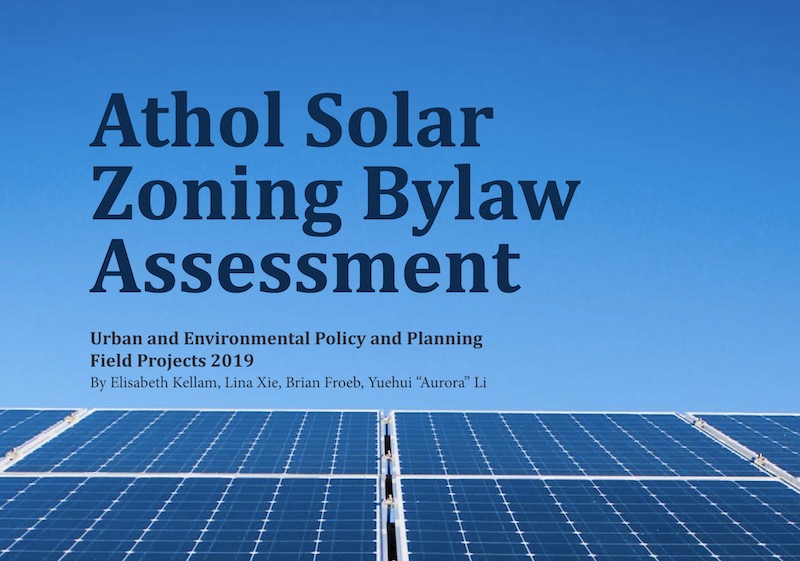 After the zoning committee regrouped following the 2020 Annual Town meeting, the topic of solar district continued to remain an area of focus, especially coming from public voices. The committee debated over the approach to the solution after much research, including a white paper developed by Tufts for the town of Athol, where the research report states:

“these concerns are especially important in Athol because current zoning bylaws do not account for viewshed considerations, and tourism is significant to the region’s economy.”

The opinions of the committee after debate were split between 2 approaches:

What happened at the 2020 Annual Town Meeting? 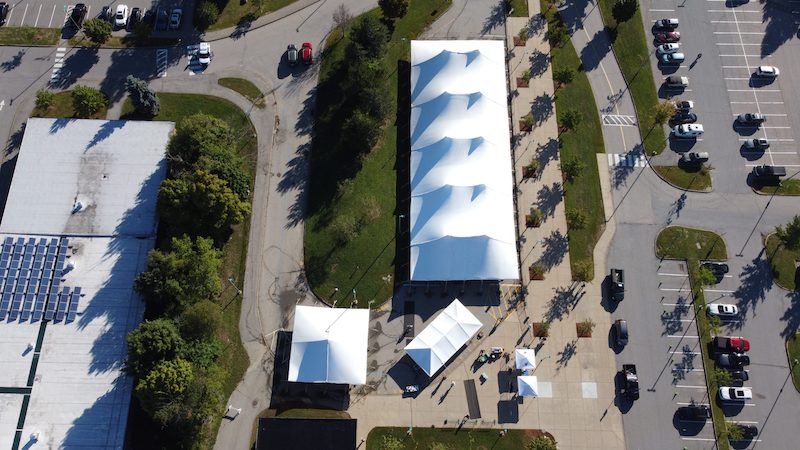 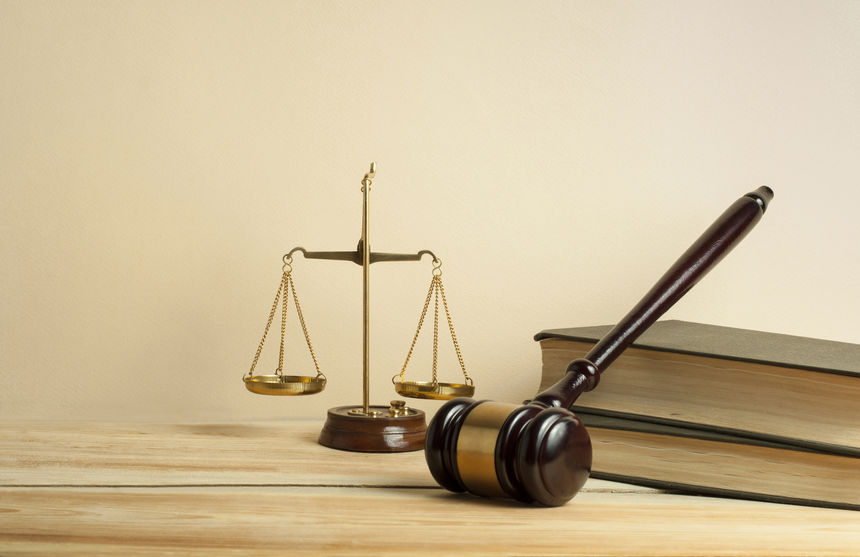 The Planning Board originally thought the Seaboard Solar project would be grandfathered in regardless of the overlay status. However, the Seaboard project would not be grandfathered in because the permit was issued much later, after the first published notice of the Planning Board public hearing on the zoning change in early 2020. According to the statute MGL Chapter 40A, Section 6, a new or changed zoning ordinance would negate any special permits if issued after public hearing notice.

The board voted by majority to leave the proposed solar overlay district as is on the Town Meeting warrant and went with option 1. 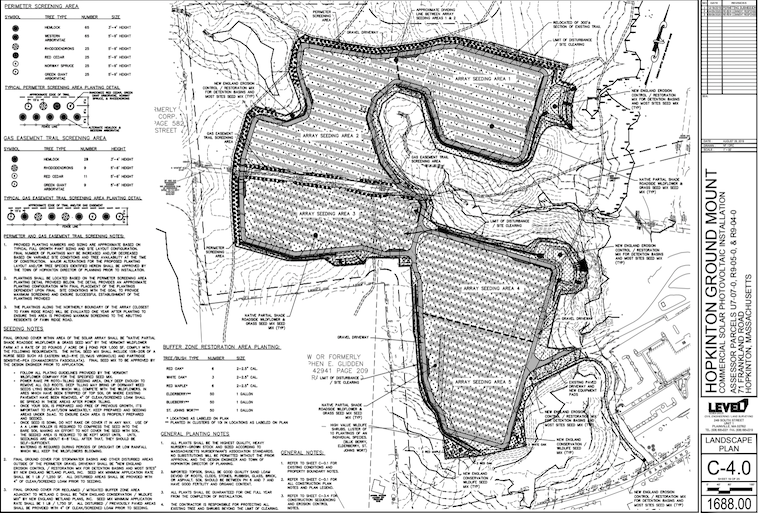 Seaboard Solar’s project to develop 28 acres of land off 71 Frankland Rd, got approved by the planning board, after the company stated plans to put a conservation restriction in place for donating about 40 acres of undeveloped open space that includes trails and a small lake. However, the proposed overlay district does not cover this portion of land. So, if the zoning map were to be included in the town warrant to be voted on, it would invalidate the initial approval of Seaboard’s project.

As of date, Seaboard Solar has not yet put the conservation restriction in place. Recently, when the company applied for DCR Forest cutting permit, it left town officials and residents surprised as they had no prior knowledge of this or contact with the company since mid-December.  Permitting from DCR takes the town out of the approval process. Under the previous agreement with the town, about 48 acres of land was to be handed over to Hopkinton Area Land Trust (HALT) for preservation. 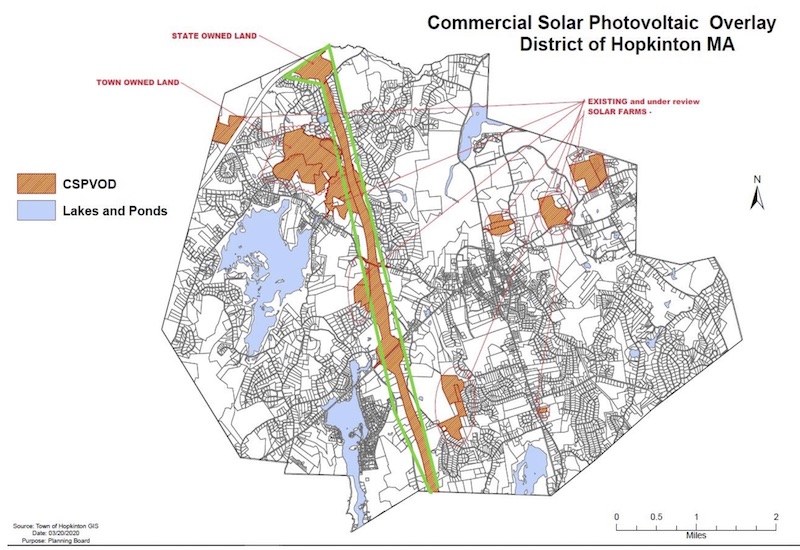 In the town’s zoning by-law, solar installations could happen anywhere in the town as long as the screening and setback restrictions were fulfilled by the solar company. A zoning map was proposed to restrict any future solar overlays to designated land parcels, where these would still require special permits from the Planning Board and Conservation Commission. Projects that were not included in the overlay district would require a two-thirds vote at the Annual Town Meeting.

The goal was to minimize the impact of deforestation and protect the rights of residents and landowners in neighborhoods close to the solar arrays being installed.

After the initial map was introduced, debate started growing after additional parcels were requested to be added by property owners so they may use their land for solar farming. These included several additional parcels close to the Charlesview Estates neighborhood, which raised the alarm for residents there.

Issues on Solar farms began to surface in 2017

Concerns grew again in 2020, with Seaboard Solar’s plan to acquire Liberty Mutual’s entire 68-acre parcel for installation of the solar arrays on a portion of the land. The project plan included plans to clear 27 acres of rich forest and habitat, which was a major area of concern for town residents and committee officials.